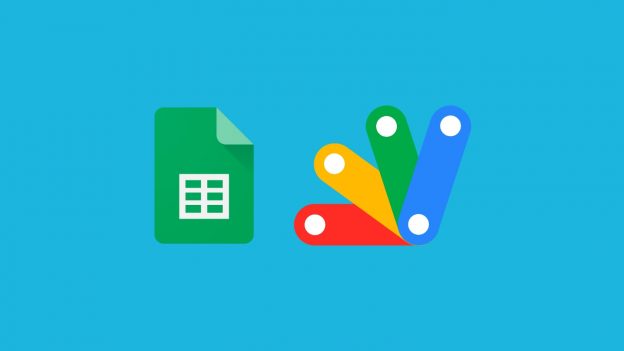 Google’s Docs Editor suite and Google Workspace are very popular for a good reason. They’re free, web-based, and cover a great deal of functionality. However, you may be wishing there was a way to automate tasks within and among the different apps. Fortunately, you can do this and more through Google’s Apps Script. If you’re familiar with JavaScript or open to learning it, Google Apps Script opens a whole new world of possibilities. You can easily create functions and apps using the many libraries available. These include all the elements of Google Sheets, as well as other Google apps and services.

In this post, you will learn what Google Apps Script is and what you can use it for. We'll show you how to get started with Google Apps Script and how to navigate it. You will also learn how to access helpful resources, like guides, references, code samples, and Quickstarts, to get you to execute code right away.

However, if you don’t have the time or the inclination to learn Apps Script’s version of JavaScript, you can also learn about an alternative that provides the same results without requiring you to read or write any code: Layer. 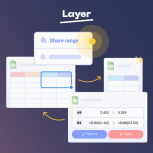 What is Google Apps Script?

Google Apps Script is a cloud-based JavaScript platform that allows you to integrate Google products and services. You can automate tasks within specific Google products, as well as more complex tasks across multiple products. The platform allows for rapid development and implementation of business applications within Google Workspace.

Why Use Google Apps Script?

If you use Google products regularly, learning to use Google Apps Script can save you a lot of time and greatly increase the functionality of your Google Workspace. Its built-in libraries and intuitive, web-based interface make it a great way to integrate Google products and automate tasks.

The more JavaScript you know or are willing to learn, the more you can do. The following list includes some things you can do with Google Apps Script.

Google Apps Script is completely free to use. All you need to get started is a Google account. If you currently use any Google products - like Sheets, Gmail, or Docs - you can get started right away. You can access the Apps Script editor directly from these products.

Now that you know what Google Apps Script is, let’s take a look around so you can get started. First, let’s access Apps Script from Google Sheets.

By default, Apps Script opens to the ‘Editor’ tab, so you can start coding right away and add libraries and services directly from this window. You can name your project by clicking on the title, as shown below. 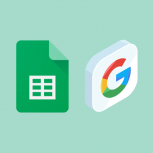 Discover the best free Google Sheets add-ons to have to save time, improve your productivity, and take your spreadsheets to the next level.

From the dashboard, you can view the project details and statistics on its use. You can also copy, star, and delete the project.

From this tab, you can create and manage triggers. 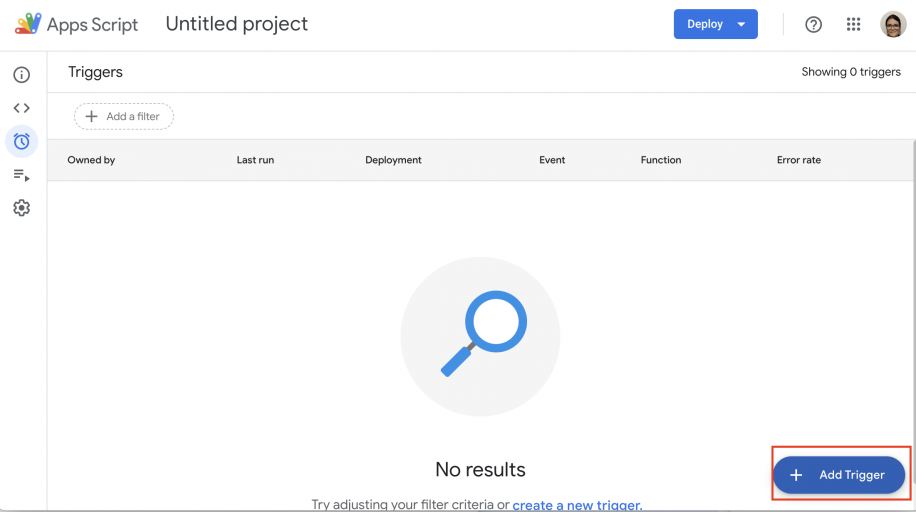 The interface is very user-friendly and allows you to select options from various dropdown menus. 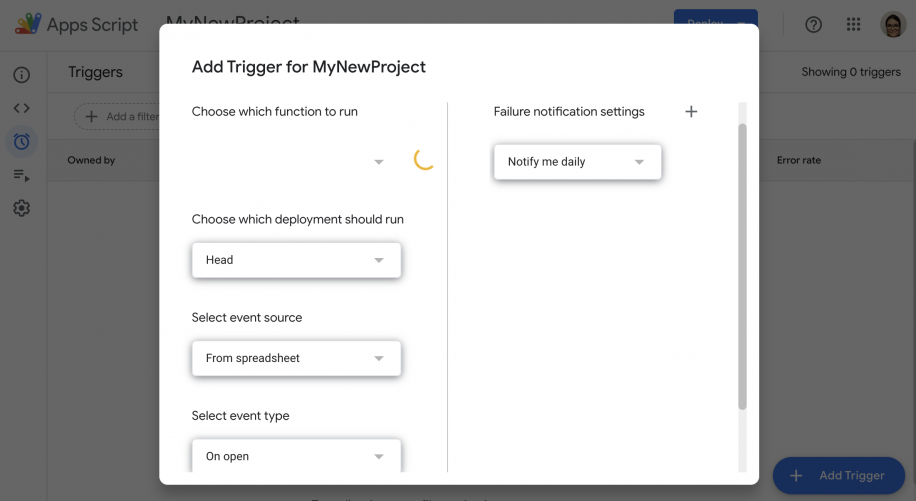 You can view and manage project executions from this tab and search your projects via multiple parameters.

On the last tab, you can modify the settings for this particular project, including your script IDs. 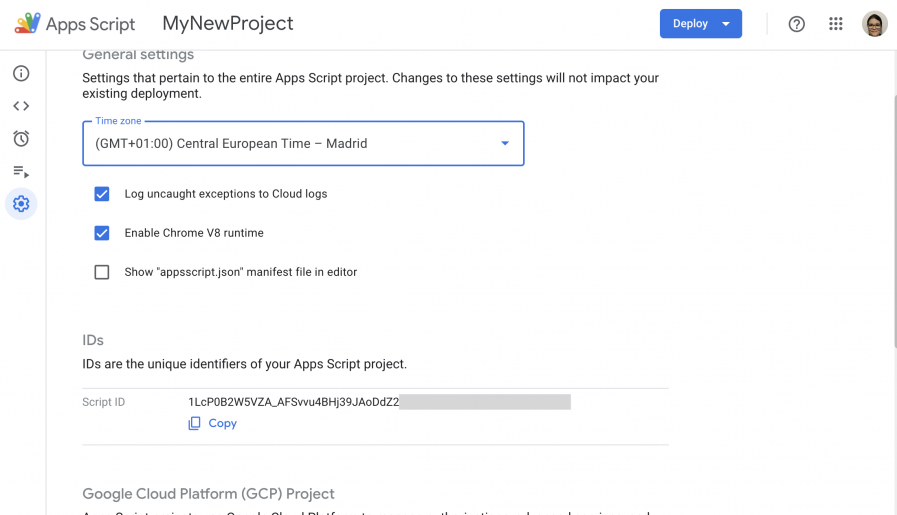 To access the home page, click on the Apps Script button on the top-left corner of any Apps Script page. From here, you can access and manage all your projects and get some help getting started. 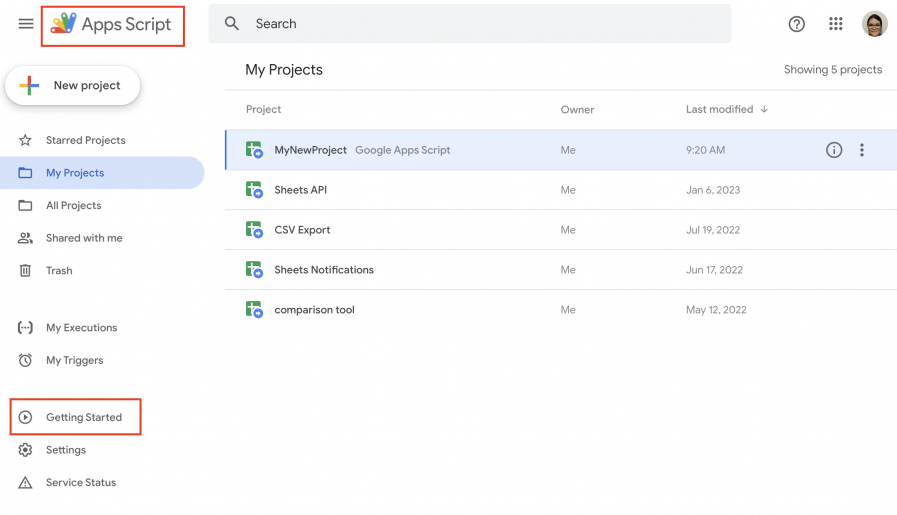 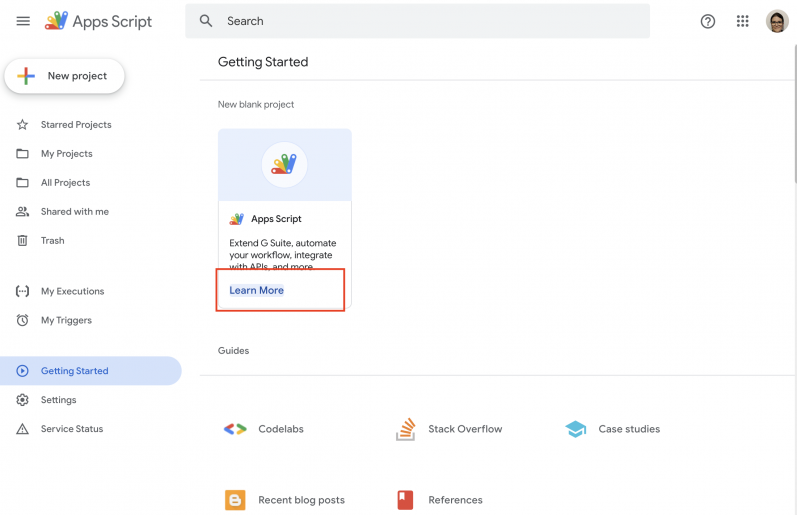 If you click on ‘Learn more’ - marked in red above - you’ll access a much larger set of resources and Quickstarts for Apps Script. 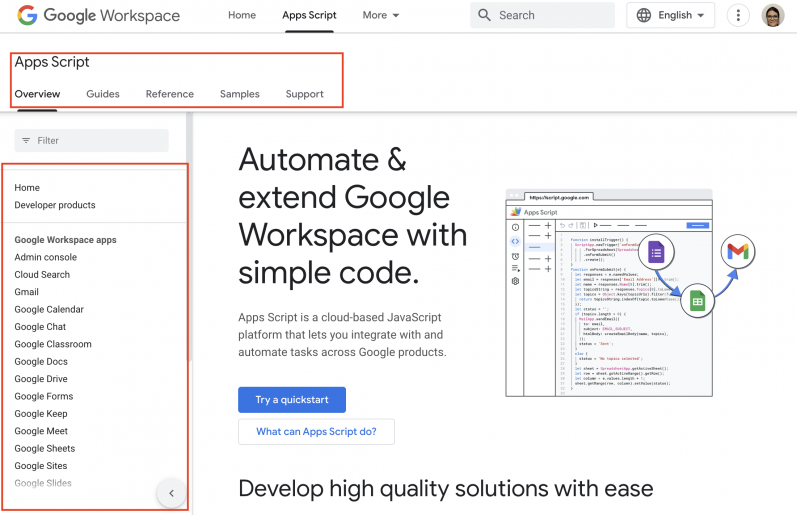 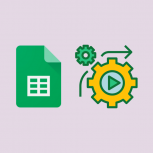 Google Sheets macros are a great way to automate repetitive tasks. Here’s how to enable, create and use macros in Google Sheets.

As you have seen, the platform provides lots of help and support to get you using Google Apps Script. There are many types of resources available to help you learn to use it and its version of JavaScript, including code samples and Quickstarts. Quickstarts are particularly useful if you’re not fluent in JavaScript, as they only need minor adjustments before you can use them. In fact, studying these Quickstarts can help you learn how the Apps Script language works.

Below, you have an example of how to use an automation Quickstart that imports CSV files to a Google Sheets file. 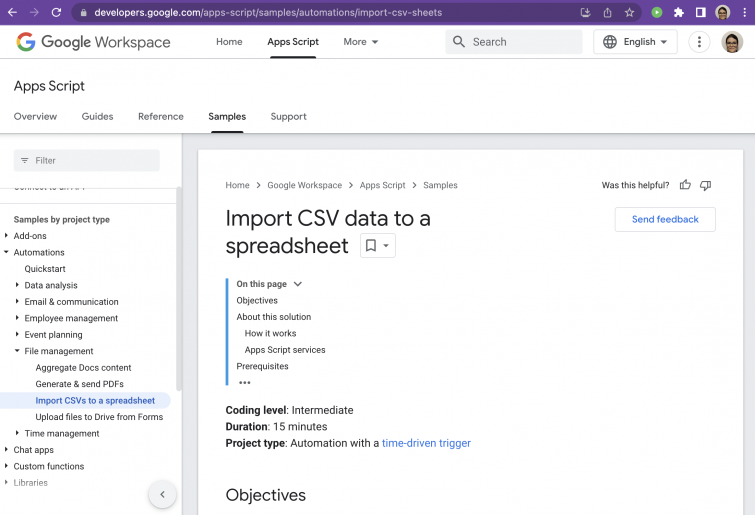 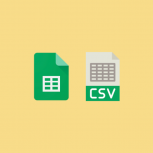 How to Import CSV to Google Sheets Automatically? 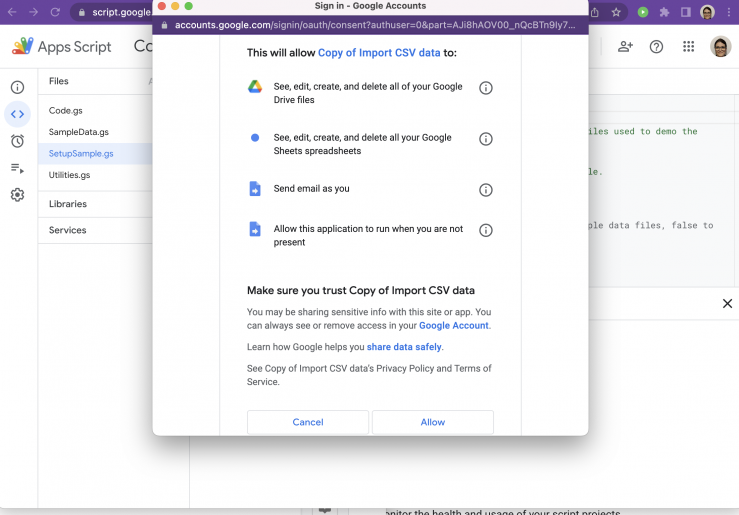 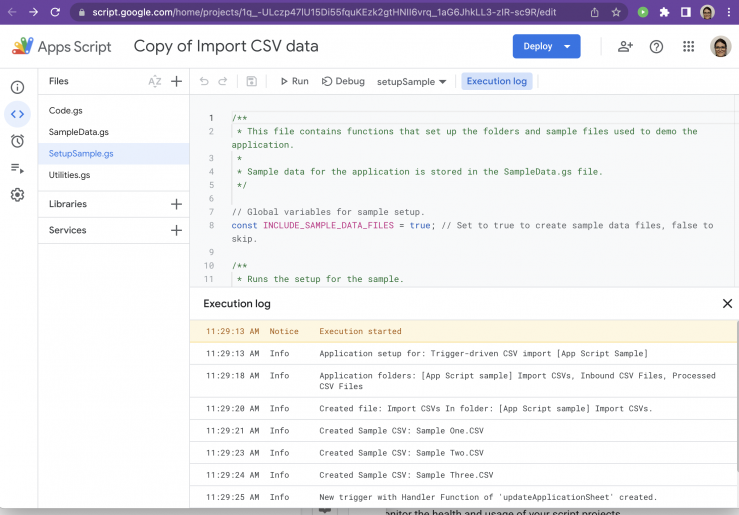 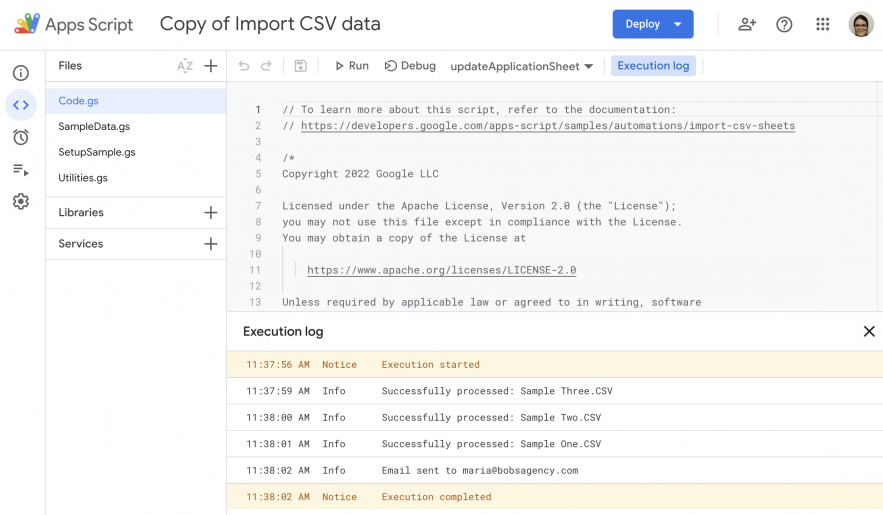 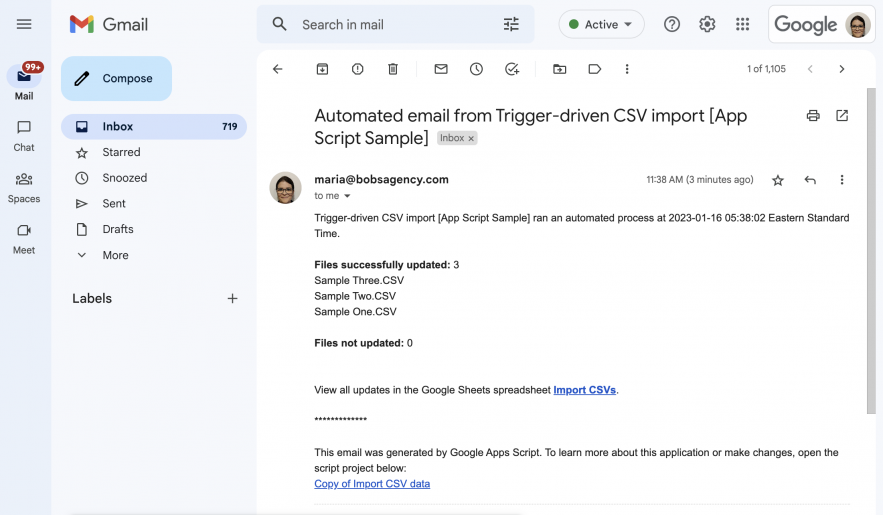 How to Automate Your Google Sheets Processes?

Layer is an add-on that equips you with the tools to increase efficiency and data quality in your processes on top of Google Sheets. Share parts of your Google Sheets, monitor, review and approve changes, and sync data from different sources – all within seconds. See how it works.

Limited Time Offer: Install the Layer Google Sheets Add-On today and Get Free Access to all the paid features, so you can start managing, automating, and scaling your processes on top of Google Sheets!

Google Apps Script allows you to automate tasks by integrating all Google products and services. You can build anything from simple custom functions to complex business apps published on the web or in the Google Workspace Marketplace. Although the platform offers plenty of help and support to get you started, it does require some coding experience and knowledge of Google products and services. Fortunately, you have some alternatives if you can’t or don’t want to spend time learning to use Apps Script. For simple automation in Google Sheets, you can use macros. For more complex automation, you can use Layer to do the work for you.

You now know what Google Sheets Apps Script is and what you can use it for. You know how to access it and how to navigate the interface, as well as how to find helpful resources and support. If you don’t have any experience with Apps Script or JavaScript, you can use Quickstarts to start using it right away and learn more about how it all works. You have step-by-step instructions on how to set up and execute a Quickstart project that imports CSV files to a spreadsheet and notifies you via Gmail. 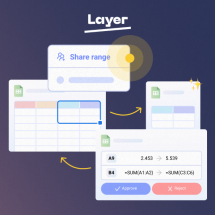